Showing posts from July, 2014
Show all

July 27, 2014
I’d like to talk today about integrity. Integrity has to do with wholeness, oneness, harmony. If you like, it’s about consistency. We usually talk about integrity in the sense of moral integrity, which is whether someone’s actions are in harmony with some kind of moral code. If we say someone has integrity, we mean that this person lives out a moral code consistently. It may even be a moral code we don’t entirely share; we might still honor the integrity of the person who sticks to that code. You might say, “I think she made the wrong decision, but I admire her integrity.” Being a hypocrite is a failure of integrity. Being corrupt is a failure of integrity. Going back on your word without adequate reason is a failure of integrity. All these things damage our moral wholeness. All of them involve us in some disconnect within our character. It doesn’t all line up. It’s in disharmony. I think we’d all agree that integrity is a top-shelf character trait that a person should strive for. I
Post a Comment
Read more 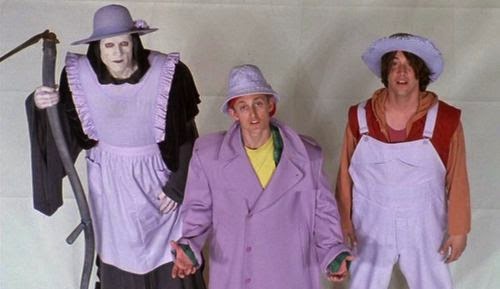 There’s a scene in Bill and Ted’s Bogus Journey, which, if not the greatest film ever made, has got to be a contender, in which our heroes Bill and Ted stand before St. Peter at the gates of Heaven. To gain entrance, Peter asks them “What is the meaning of life?” After a brief private conference, Bill opens his arms and says most philosophically, “Every rose has its thorn, just like every night has its dawn, just like every cowboy sings a sad, sad, song…every rose has its thorn.” Peter is more or less satisfied, not seeming to realize that they’re just quoting a Poison song from 1988. And yes, I do like Miley’s cover and don’t care who knows it.
Post a Comment
Read more

Getting Through? 15th Sunday OT 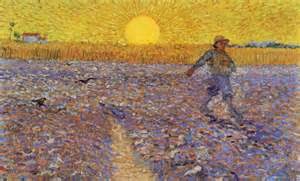 Matthew 13 in an invitation to consider whether God is getting through to you. His simple story of the sower catalogues some of the things that can go wrong. If the seed doesn’t grow, why? Grace and beauty and truth are all around us. What keeps them from getting through? Consider the hard ground on the pathway. We can be hard, and we can be hard in such a way that God can’t get through to us. Some of us begin to think of being hard as a virtue, but it’s a mistake to confuse hardness with strength. Shutting people out is done out of weakness and fear. It’s what you do when you can’t cope otherwise, and people can become very hard when they’ve been hurt too often, or frustrated too long, and the defenses have become impenetrable. Human connections become an unacceptable risk, and the pain and risk are walled off. So are beauty and love, but that’s a price you’re willing to pay. It’s probably not a decision you made; it just sort of happened over time. Now you feel cut off fro
Post a Comment
Read more

“Your interests are not in the flesh, but in the spiritual, since God has made his home in you.” That’s Romans 8:9, and I wish it were true. But sadly, this verse has the form of an instruction, an ideal - something we’re trying to make true. It’s the way disciples of Jesus should live. Paul is blunt in explaining that it makes no sense for a disciple of Jesus to mix up spiritual life with its opposite. If God is dwelling in us, there’s no room for anything contrary to Him. Paul reminds us that the Spirit that lives within us… that’s the same Spirit that raised Jesus from the dead! The power at work within your soul is nothing less than that same Spirit! Do you think that’s going to make a difference in your life? Paul sets up a simple distinction: the spiritual versus the flesh. We have to be careful with this language because it easily can be, and often has been, misunderstood. Does it mean that the flesh, our material bodies, the whole material world, are wicked? Many Christian
Post a Comment
Read more
More posts