Return to Your Temple: Presentation of the Lord

February 04, 2020
I'm going to try to tell a 600 year story so I hope you grabbed a bulletin to read. It's especially challenging because the context is the Babylonian Exile, and I don't presume many of us know much about that. I think most Catholics could do a decent job telling the story of Noah. I think most of us could probably tell the Exodus pretty well. Maybe we could sketch out the basics of the time of King David. But how many of us could say much at all about the Exile? For many Catholics, maybe the word is kind of familiar, they’re aware in a vague way that it was a thing, but maybe couldn’t really begin to say what exactly it was.

And yet, the Exile takes up more Biblical real estate than any of those events I described. It’s the main context of most of the Prophets. If you held between your finger and thumb the part of the Old Testament that’s centered around the Exile, you’d be holding pretty much the last third of the whole thing.

The tenth chapter of the Prophet Ezekiel is among the most crushing in all the Bible. It’s a vision of Ezekiel as the exile is just beginning, the people are conquered and being forcibly taken from the land promised to the Abraham, dispersed and relocated, exiled to Babylon. Think about the loss of that promised land and what it meant to them and their history and identity, the hopes and certainty they’d staked on it, and imagine how devastating it was to be exiled. But in this devastating moment of Israel’s history, that isn’t the worst. The worst is what Ezekiel saw and described in his tenth chapter: he saw the Glory of God rise up out of the Temple and depart.The Lord left His Temple. Ezekiel knew, then, that the city was finished and that the nation was headed for ruin.

Somehow Ezekiel and the other Prophets also knew that God had not abandoned His people. They trusted that even this was part of God’s plan of salvation. The people had abandoned God, and the exile was God’s way of not abandoning them, not giving up on His plans for them. He sent them away physically so He could bring them home spiritually. The Exile was the toughest medicine ever dispensed in all the Old Testament, but it was medicine. It was love.

So Ezekiel promised a return even as he wept over the exile. The return happened and it was a glorious, joyful moment. But here’s something strange: there’s no reverse scene of what happened in Ezekiel 10. Later in chapter 43 he has a prophetic vision of God’s glory returning in the future, but nothing really fulfilling this seems to happen when they do return. It’s a striking thing to be missing.

And everything I’ve said so far is context to understand our first reading, which isn’t from Ezekiel at all, but from a few hundred years later in the prophet Malachi, who says “Lo, I am sending my messenger to prepare the way before me; And suddenly there will come to the temple the LORD whom you seek.”

Malachi’s promise is beautiful, but also acknowledges that even after the exiles returned and rededicated their Temple, the Lord’s return was somehow still being waited for. In the meantime they kept up the Temple worship. Generation after generation of priests took their turns in the sanctuary. The candles kept burning and the sacrifices were offered.

They were still keeping it up about four hundred years later when a priest named Zechariah took his turn to enter the Holy of Holies. Zechariah came out of there unable to talk. He’d had some kind of vision but he had been struck dumb, and couldn’t speak until his son was born. When he finally could speak, he’d had plenty of time to think about what to say, and this was it: “You, my child, shall be called the Prophet of the Most High, for you will go before Him to prepare His way.” It was a direct and unmistakable reference to Malachi’s promised messenger. Zechariah quoted the words of Malachi from four centuries before, and claimed them for his own son, and John the Baptist would indeed do exactly that.

I love that Luke begins that Temple scene by introducing us to two of my favorite people in the Bible: Anna and Simeon, two faithful elderly Jews who we learn were always in the Temple, who were waiting for the Lord. They stand there for all of us, for everyone who’s ever waited and hoped. They are like so many today who spend the later season of their lives in prayer, who you might say are ‘always in the temple.’ There are so many Annas and Simeons in our parishes! But for them it was a hope not yet realized, a Promise they trusted would be kept… someday.

I picture them in quiet prayer in the candlelit Temple. I picture the shadows darkening the door, cast long across the ground, the foster father and the mother holding the child. I picture Simeon and Anna looking up.

The Lord had returned to His Temple. 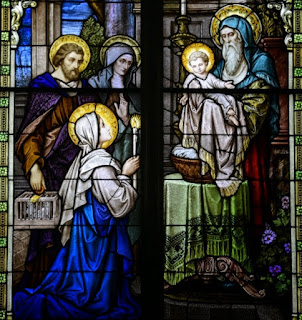 And His Presence remains to this day. Not in a single Temple on the other side of the world, but in every tabernacle in the world. Here. All the time. The Real Presence.

And that’s incomprehensibly beautiful and amazing, but we’ve got to take it one more step. Because in the New Testament, God’s Word doesn’t say that the churches we build are Temples of God’s Spirit. It says that we are. Our bodies. 1 Corinthians 6:19. Our bodies are temples of the Holy Spirit, because Jesus’ Eucharistic Presence isn’t just something we can visit, but Someone we receive.

And the Lord returns to His Temple again and again. Hopefully we never drive Him away, but if we do, He will return the moment we allow Him. Go to confession first if you need to, because Jesus also cleanses His Temple! But let Him return. Let the Presence of Jesus Christ fill your spirit, your mind, and your body. We are His, and in every Mass we witness Malachi’s prophecy fulfilled in a way so far beyond anything he could have imagined. Come, Lord Jesus, and return to Your temple.