January 08, 2017
Only Matthew tells their story, and he tells almost none of it. People are sometimes surprised to learn that the Bible doesn’t actually say most of what they think they know about the Three Kings. Like, for example, that there were three of them. Or that they were Kings. Matthew does say that they came from the East following a star.

I just keep thinking about that star. It’s always been fascinating to people. Astronomers have scoured the records and charts to see if they can find some trace of it in a supernova or some other astronomic event. Historians have looked for other reports from that time period that might give a clue. But that sort of thing is less interesting to me — because even pinpointing some supernova that everyone saw just wouldn’t go very far at all in explaining the journey of the Magi. I’ve seen unusual and surprising things in the sky before. None of them ever made me say, “I’d better get a few friends and pack some bags and start walking westbound until I get some signal from the universe that it’s time to stop. And I’d better take some frankincense. Just in case.”


Of course, they knew more than that. They came expecting to find a King. And they somehow knew to expect a King of special significance, deserving of a great journey, deserving of great gifts, deserving of homage. And what a strange combination of gifts: gold for royalty, incense for worship, myrrh for death and burial.

That journey has always been a source of inspiration. T.S. Eliot, in his poem The Journey of the Magi, wrote in terms of the everyday hassle of traveling: “A cold coming we had of it, just the worst time of the year for such a journey.” The classic and tremendous hymn by John Henry Hopkins, Jr. gives the opposite perspective of a sweeping epic journey: “field and fountain, moor and mountain.”

Surely both perspectives are true ones. Surely it was a grand epic adventure like Hopkins paints… and also full of hassles and inconveniences like trying to get along with the stupid camels like Eliot describes. And Hopkins’ hymn and Eliot’s poem both lead to profound and surprising conclusions at journey’s end.

I wonder if they were ever confused along the way. As they passed through one strange town after another, getting suspicious glances and wondering if this next group of passers-by were robbers or not, and trying to keep the camels fed and asking for any news from the distant West of some new King and getting confused looks… were there moments when they felt totally lost and adrift, unsure about what the heck they were even doing? 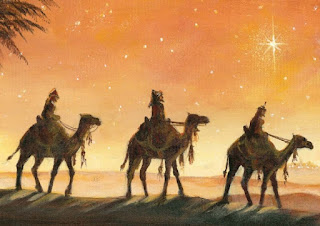 Imagine them trying to explain it to a fellow patron at some inn and tavern: “Well, we’re from way, way East of here, and we’re sort of astrologer types, you see, and we saw something about a King to the West, and so we started following this star and here we are.” You know that feeling when you start explaining yourself to someone and only then, hearing yourself trying to explain it, you realize it’s totally bonkers?


What did they know about the destination? How far it was, or when they would arrive, or what obstacles lay between here and there, or what they would find at the end, or how they would know when they’d arrived? They had so little to go on. Nothing, really… just that star. I mean that sounds nice, but really, what does a star tell you? I want to know if there were nights they looked at that star and wondered, “what are we doing?”

And I’m praying this Epiphany especially for all the fellow-travelers and wanderers who… you feel like strangers in a strange land. You dimly recall a sense of certainty and purpose but you struggle to remember it in the weary middle of the journey. You started out doing what seemed like the right thing to do, following what seemed to be the path, but paths have a way of starting out clear and gradually becoming invisible. It’s happened to me hundreds of times in the Shawnee, and it’s happened to all of us in life at one time or another. It all made sense when you started. Somewhere along the way, you lost that. And you keep going, because, what else are you going to do? But you don’t know how far it is, or when you’ll arrive, or what obstacles lay between here and there, or what you’ll find at the end, or how you’ll know you’ve arrived.

You don’t have clarity. You don’t have certainty. What you do have is the decision to keep going. There’s something tremendously hopeful in that, even though you might not feel very hopeful. There’s something tremendously hopeful in trusting that somehow, when it’s all said and done, under God’s providence, this all just has to end somewhere that makes sense. 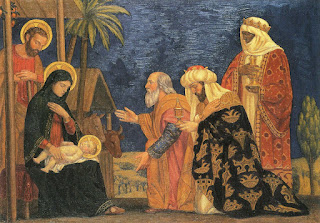 And, if you’re someone who feels that way right now, learn from the journey of the Magi that you do have a guide if you know where to look. Look up. Find your star and follow. The star may not explain itself; it may not give you all the answers and clarity you wish you had. But it will be there, just enough of a glimmer, just one little point of light promising you that this will all come to something in the end that makes sense. Believe it. Bet your life on it. After the long road with the feelings of strangeness and the risk of robbers and keeping the camels fed… and the paycheck coming and the diapers changed and the chores done and all of it, all of it… all you have to know is that the star is there, it’s leading you on, and it’s all leading somewhere beautiful. To the place where everything comes into focus and makes sense. Where you can see how much it all really mattered. Where you can feel how much you are loved.

Keep looking up. And keep going.