November 23, 2019
José Sánchez del Río was born in Michoacan, Mexico. He grew up in a devoted Catholic home: daily rosaries and devotions, faith as the clear center of family life. His activities included playing marbles, horses, and convincing other kids to make holy hours. José was born in 1913, so he could conceivably have still been alive today as one of the oldest people in the world, at age 106. As it happened, he made it to 14. By then, practicing the faith in his country had become… not so simple. Mexico was ruled by a maniacally anti-Catholic socialist government. Many USA citizens today think of Mexico very simplistically as a Catholic country, totally unaware that within a current lifespan Sacraments were outlawed, Bishops exiled, and resisting priests tortured and killed on sight. A rebellion called the Cristeros rose against this, and young José was eager to join. It wasn't easy for him to find a role he could play at such a young age, but his courage and actions turned out to be astounding and inspiring to others. 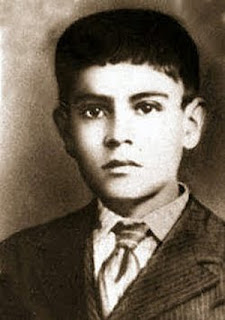 José was captured. What followed was horrific, and José just kept saying, shouting, over and over again, "Viva Cristo Rey!" ("Long live Christ the King!"). His tormentors got so sick of hearing it, they actually offered to spare his life if he would say the opposite: "death to Christ the King." You can guess José’s last words. VIVA CRISTO REY.

Another martyr from that time died 92 years ago today [11/23]: Fr. Miguel Pro was secretly celebrating Mass and ministering to the brave faithful. Captured and accused on false charges, he was executed without a trial. As he stood before the firing squad he stretched his arms out like Christ's and shouted Viva Cristo Rey! The photo was published by the government to discourage other rebels... well, you know what Catholics are going to do with that. They gloried in it, copied it, displayed it, and made it an inspirational rallying point.

Their movement lost, by any worldly measure. By any military or political analysis, José’s cause failed. Just as by any military or political analysis, Jesus’ cause failed. They looked at Him on the Cross and mocked: let Him save Himself if He is the Christ! He even mentions the possibility, being arrested in the garden on Holy Thursday: “Don’t you think I could call on twelve legions of angels to fight for me?” And Jesus could have been the strongest conqueror by force in all history. And the end of history and the story of the world would then always be the victory of force and conquest and power. That’s the world you have when Caesar is King, or the political party is King, or the democratic majority at any given moment is King, or you yourself and whatever you happen to want at any given moment are King.

Young José could have saved his life by denying the Kingship of Christ, but he chose a greater victory, he accepted the true salvation, and he died undefeated. They could hurt him, they could take his life, but when they’d done their worst they were standing there having been totally defeated by a dead boy… because they couldn’t make him stop saying that Christ is King. Martyr after martyr in those days died shouting the same. It is the anthem of a free Christian, free despite any oppression or threat, free even when that means only the freedom to choose death over apostasy.

I just want to be with that thief on the Cross. “Lord, remember me when You come into Your Kingdom.” He looked out over the mocking powers of the world, with all their stupid violence and insane sinfulness, a thousand sad little gods of their own thousand selfish little worlds, and then he looked over at the man hanging beside him, Who proclaimed good news to the poor and freedom to captives and sight to the blind, Who is somehow the victor in His own execution, and he thought that’s the Kingdom I choose.

José Sánchez del Río made the same decision: Viva Cristo Rey. I’m with Him. How many martyrs continue to claim this same victory? The Church from the earliest years of persecution has treasured their stories: partly because they deserve the honor, but even more because we need the witness.

We’re meant to hear their stories and claim the same victory over the oppressors in our own lives… which for you and me, means first of all our own sinfulness. There’s no Caesar or Gestapo or Politburo telling me I can’t live my life for Jesus; no, it’s my selfishness that’s doing that. There’s no knife held at my throat telling me to break God’s Commandments; it’s my own sinfulness doing that.

José Sánchez del Río chose death rather than to say “death to Christ the King.” But Christ the King did die, and it was for my sins and yours. Every sin says that louder than words. It’s sin that meant death to Jesus, and “death to Christ the King” is actually what happened that Friday afternoon… but that’s just not the end of the story. The thief had it right. Young José had it right. All the Saints who have chosen Him over everything have it right. Our King walked out of His grave; He conquers what we can not, He washes away our sins with the same Blood He gives us from this altar, He heals and redeems and restores and now we are free. Viva Cristo Rey.