The law right in front of you: 15th Sunday OT

July 13, 2019
These are some of Moses’ last words. They are from the thirtieth chapter of Deuteronomy; Moses will die on the threshold of the Promised Land in chapter thirty-four. He has been the central figure through the books of Exodus, Leviticus, Numbers, and Deuteronomy. We hear about his amazing life in those books, but most of the pages are not given to storytelling. Most of it is the Law. Beginning with the Ten Commandments, and expanding outward from there, Moses established a Law that was still being followed fifteen centuries later when Jesus came. Indeed, it is still followed exactly by many today, thirty-five centuries later. That’s really incredible! Can you think of anything else in all of history comparable to that? 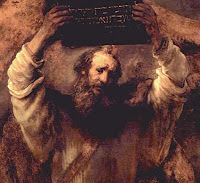 A lot of the laws are kind of distant and strange to us today. I couldn’t begin to tell you what was wrong with making a shirt with two different kinds of fabric. And, indeed, the Christian Church acknowledged that in Jesus’ fulfillment of the law, much that was unclean was made clean, and many of the ceremonial and dietary laws have served their purpose. But the moral core of the Law that remains, like the Ten Commandments. And above all, the highest law of Moses, the highest law of God, which Jesus quotes directly from Deuteronomy 6:5 and Leviticus 19:18 - “You shall love the Lord your God with all your heart, with all your soul, with all your strength, and with all your mind, and love your neighbor as yourself.” This wasn’t some new revolutionary idea that Jesus made up. The scholar who is questioning him can quote this right out of the Torah, the Scriptures they already had. And he understands that these two commandments are the center, the hinge, on which all the rest of the Law turns — he gets that.

Listen to what Psalm 19 says about God’s laws:
The law of the Lord is perfect, refreshing the soul;
… giving wisdom to the simple …rejoicing the heart… enlightening the eye…
… sweeter than syrup or honey from the comb.

But you and I don’t always react that way to God’s laws. When you want to do something and God forbids it, like spreading gossip, or getting drunk, or being fully intimate outside marriage, right on down to taking His name in vain… the law doesn’t always feel refreshing and delightful and sweet, does it? But remember who wrote Psalm 19. David wasn’t so hot at keeping the law himself. He couldn’t always have written these words truthfully. David learned this the hard way. And not a way he can downplay, like ‘it isn’t a mistake if you learn from it,’ or ‘my mistakes made me who I am and I wouldn’t change a thing.’ Nonsense. David has wreaked havoc in people’s lives. He’s hurt his whole nation. He’s killed a good man. I don’t care how much of an appetite for drama and tragedy you have: you don’t want to learn the way David did. You look at all the people he hurt, all the people sin is hurting today, and you can just weep when you read Moses in Deuteronomy 30:10 saying: “if only you would heed the voice of the Lord, your God, and keep His commandments and statutes written in this Law, and return to the Lord, your God, with all your heart and all your soul.”

You look at the devastation, the misery, and you see people hurting, and you just want to cry, “if only you would heed the voice of the Lord, and keep His commandments.” Not to say that you won’t ever suffer if you do keep them, but life will be so much better. It just will. Ask David. He’d manufactured plenty of misery for himself and others treating God’s commandments as optional, and he’d lived in that darkness and descended deep into that sludge. And when he repented and returned to God, when he embraced the commandments and let them guide his life, that’s when he used the words “refreshing, rejoicing, enlightening, sweet.” After experiencing the alternative, God’s commandments were like - what’s our phrase? - ‘like a breath of fresh air.’ Ever come out of a really awful outhouse into the fresh air? It’s been dark and confined and awful and in one glorious moment you emerge and your lungs open up and you suck in that glorious fresh air and the sun hits your face and life is beautiful again? That’s what it’s like. And now you have a new weirdest spiritual metaphor ever. Maybe that’ll be my new moral catchphrase: “come out of the outhouse!” It would probably sound better in Latin.

Moving right along…. I’m going to ask you for a moment of self-reflection here. As I’ve been talking about keeping the Law, I’ll bet you five donuts you’ve been thinking about laws forbidding things, about stuff you aren’t supposed to do. I’ll bet that all this talk about keeping the commandments has had you thinking mostly or even exclusively about laws telling you what you must not do, “thou shalt not.” I found that mistake in my own homily, because earlier when I rattled off a few examples, like lying and gossiping and unchastity, they were all about stuff you aren’t supposed to do.

That’s imbalanced; it’s out of whack, and I didn’t rewrite and fix it because I thought I’d leave it as a humble example of this mistake we often make. Cut out the stuff you aren’t supposed to do, sure, of course, that’s the baseline. But you’re not done yet. You don’t win a basketball game by not committing fouls. You can lose a game by committing them, but just because you’re not fouling doesn’t mean you’re winning. Get my meaning? Moral life is the same. Saying I’m a good person because I don’t break the ‘thou shalt nots’ is like saying I’m a good basketball player because I rarely charge or travel. Um, okay fine buddy, but what can you do?

You all know the story of the Good Samaritan, and you could have probably told it pretty accurately from memory, but would you have remembered the question to which this story was Jesus’ answer? The scribe had asked Him, “who is my neighbor?,” and it came up in a conversation about keeping the Law. The Good Samaritan is a story about keeping the law, that highest law quoted from Moses about loving God and neighbor. And it’s one of those times you can really see Jesus as a master teacher. They’ve been quoting Scripture to each other, theologizing, having this sort of elevated and scholarly discussion. Hooray for that, that’s good! But to complete the lesson, Jesus directs the man’s gaze right down to earth, down to the ground, down to the ditch, the gutter along the road, where there’s a fellow human being who needs help.

That’s Jesus’ answer about how you keep the Law. You want to keep the Law? Cut out the stuff you aren’t supposed to do, sure, of course, that’s the baseline. But you’re not done yet. If you want to live the Commandments, look at the ditch. Stop pretending not to see what’s around you. Stop finding ways to not be bothered by other people’s pain. Find somebody who’s hurting, and help.