August 18, 2018
It's the third of four consecutive Sundays that we hear from John 6, from what’s called the Bread of Life discourse. It offers a chance to look at the Eucharist from a few different perspectives. So two weeks ago, the focus on receiving Jesus. Last week, the focus on offering Jesus. This week we'll take a more personal angle. 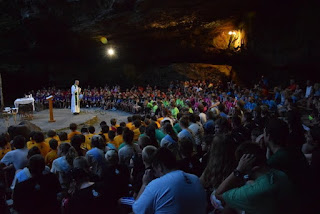 My summer Mass schedule has just changed a lot with the end of the Sunday night camp Masses, shuttling between Gallatin County and Camp Ondessonk. It’s a big shift to make in the space of an hour’s drive. I love them both, but they’re really different! The most obvious difference at Camp is that we’re outside, under the overhanging Grotto, looking out over Lake St. Isaac and up at God’s universe and the swallows flying around the bluff. It can also be swelteringly hot in vestments, but the spirit and energy of those liturgies is amazing. My preaching there is very different as well. The sermons here wouldn’t work there, and the sermons there definitely wouldn’t work here. Also here at St. Kateri it’s safe to assume that a snake is not going to fall from the ceiling and land on two 10-yr olds. Let's just say that was a memorable evening.

So many campers have said “that was the best Mass I’ve ever been to!” which is great to hear, but I worry a little bit too. I hope it doesn’t make them dissatisfied with Mass at home, because that would be missing the point of the Mass altogether. I love those Masses at Camp, with the swallows flitting around their nests in the bluff and the crickets singing along from the lake. We’re hot and noisy and energized. But what really matters is what’s always the same: that we offer bread and wine and we pray, and Jesus is with us.

Pretty much the most different Mass from that I can probably imagine is the first Friday mornings at the nursing home. That Mass would probably not be called energetic, but in its quieter way it offers such beautiful gifts, insights about priorities and human life and what is truly essential in our short time here, and how much we need God, and how much we need each other. No snakes so far. But one time there was a lot of flu around and I was looking out over a congregation all wearing bright yellow face masks. It was so surreal and hard not to laugh when I said “The Lord be with you” and you all responded “mm innt err irrrrittt.” But what mattered was that we offered bread and wine and we prayed, and Jesus was with us. 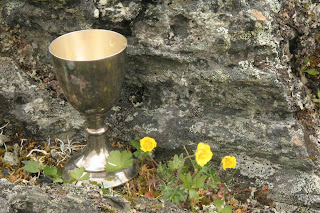 I’ve offered the Mass on a bandana at the top of a mountain pass in Alaska. I’ve offered it in a condo with fifty aunts and uncles and cousins crammed into a living room. I’ve offered it in prisons and houses and hotel rooms. I’ve offered it as a priest in English and Spanish and Latin and as a congregant in Italian, French and German. It’s always Mass. One Christ, one Body, one Church, one Offering.

It’s the Eucharist that makes us the Church. It’s the Eucharist that brings it all together. Jesus said “Whoever eats my flesh and drinks my blood remains in me, and I in them.” That is our deepest connection to God, and within it is our deepest connection to each other. Those of us gathered here in worship, but just as much the people who have left us or been left by us... the ones we’ve loved, who made us who we are, who changed us. The companions separated by circumstance, or distance, or estrangement, or just life taking you different directions. And so many that leave us in death, to be seen no more on this side of the Kingdom. How can you stand the goodbyes? How can you let go of the places, the people, the seasons of life when they go?

My friend John knew the answer. I was leaving Alaska, where I’d spent the best summer of my life living with him and his wife and parents, his sister and nephew, all in a house and my heart was broken to be leaving that place and those people. And at the airport gate there were a bunch of hugs and all that, and I felt so attached to them and to my life there that I didn’t know how to just turn and walk away. And John could probably tell, and he just said, “I’ll see you at Mass.” I’ve never forgotten that. Most of them I have not seen since, and may never again, but I see them at Mass. And my Grandad and Grandpa, my heroes that I miss so much, they’re here too. It means something to be the Body of Christ. We remain in Him and He in us.