April 15, 2018
It’s real. That’s certainly one of the lessons of this Gospel story. Jesus really rose from the dead. It would be easy enough, and a lot more comfortable, really, if we sort of made a spiritual symbol out of it. And that could easily happen. It’s common enough to “see” someone you’ve lost, especially after a sudden and tragic death, especially in those first days after the loss. You keep glimpsing them in the crowd. They’re there in the corner of your vision, and you whip around to look before remembering it’s impossible. You ‘see them everywhere.’

And even an atheist, or someone who doesn’t literally believe in eternal life, can have that feeling like ‘I still feel her with me’, or ‘I know he’s still here somehow,’ meaning that the person’s impact on you was so strong that it affects you profoundly and forever. These are all ways of someone living on after death, in a spiritual or symbolic way.

Well, the Gospels are going to make it abundantly clear that that’s precisely NOT what they mean when they say Jesus is alive. Because here they are face to face with Him, and thinking they’re seeing a ghost, right? They’re scared because they’re looking at someone they saw die and they think they’re seeing a ghost.

It’s hard to imagine anything less symbolic and ghostly and spiritualized than watching someone chomping into a piece of fish.

Whatever else Luke is telling us here, he’s making darn sure we understand that the Resurrection of Jesus was real. The body walked out of the tomb. The one that was dead. It came to life, and it was really Him, and there was nothing symbolic or spiritualized about it, He was simply there, actually there, it was real.

And the rest of our Scriptures today seem to be saying: “now… act like it. Make it real.” Peter stands before a crowd of people and says “Repent, therefore, and be converted, that your sins may be wiped away.” The Resurrection of Jesus is reported as Good News, and it sure is. It means sins can be forgiven. But from the very start, it was preached also as a call to action. Christ is Risen! Alleluia! Now ACT LIKE IT.

John’s letter contains a sort of pattern that we find all over Christian life. Quit sinning, he writes. Don’t sin. But he quickly adds: But if you do, Jesus has won forgiveness and mercy and is our advocate. But just as quickly adds again to that: but don’t sin. That pattern is so very human and relatable, isn’t it? Don’t sin. But if you do it’s okay God will always forgive if you’re sorry! But don’t sin, if you say you love Him but don’t keep His commandments you’re a liar.

I find myself turning laps around that same circle sometimes in the confessional. You say you’re sorry for doing that… great. So stop doing that. It’s evil, it’s sin. Stop it. BUT God’s mercy is amazing, so even if you fall again come back and ask for mercy again and trust you’ll always be forgiven! BUT, you know, stop sinning. But if you do, you can always be forgiven. But don’t. Which one should I end on? Should we focus more on converting, really changing our lives the way Jesus insists we must? Or on mercy, remembering that we’ve all fallen short and none of us deserve what God wants to give us?

Christian life consists largely of running around and around that circle. But if we are truly open to God’s grace, we do make progress, and each time around moves us a little heavenward… so it becomes not a circle, but a spiral.

Because the Cross of Christ which we place at the center of our religion contains both of these elements and one can’t be chosen over the other. They are two things that if you look at a Crucifix you can’t not know. 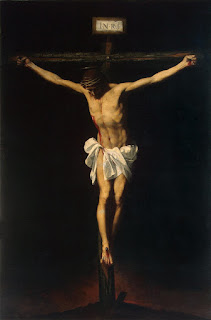 The way of truth is in really getting both of these through our heads, really understanding both the horror of sin and the abundance of mercy. If you miss the mercy you’re a person of despair, losing hope in yourself and ultimately in God’s love. If you miss the sin you’re a person of presumption, who John says have not the truth of Christ in them. The Cross is the answer to both. The Cross unlocks that puzzle, presenting both truths so clearly you can’t not know them. Sin is a big, big deal. Mercy is real and abundant and yours for the asking. Maybe that’s why we hang crosses everywhere in Catholicism. To never forget how serious and powerful sin is. And to never forget how much more powerful God’s love and mercy is.