I remember being a kid in school and how we’d observe Thanksgiving. We’d trace around our hands on construction paper and cut them out to make turkeys. Maybe we’d have a little bit of dress up as Pilgrims and Native Americans. I remember there being a lot of buckles involved, or feathers, depending on the role. And of course we’d hear about the Pilgrim story, and the first Thanksgiving.


Most of those memories are a little hazy now. I remember learning about the Native Americans and the Europeans sitting down together in harmony. I remember imagining how they were happy to be living on this bountiful land, and to have made friends, and to be prospering. Tables full of food, happy families, exciting Indian neighbors to hang out with.

Okay… well, here’s the truth. The colonists we know as Pilgrims were 66 days at sea, before landing to establish the Plymouth Colony. Imagine 66 days in those conditions… this wasn’t exactly Carnival Cruise Lines. Through the winter most of them stayed on the ship. It was safer than exposure outside, marginally, but the trade-off was still brutal conditions riddled with contagion and scurvy and bitter cold. At the end of winter, half of them had survived. 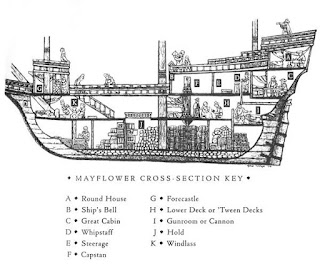 It’s a pretty different story from the one I’d always imagined. Imagine a voyage like that. A hundred
people on a crowded ship, and only fifty were left to even see the first harvest. These were families. This is a disaster story.  The Pilgrims who made it to that summer were not swashbuckling conquerors; they were grieving survivors. The famous story happened in that context, the aid of Squanto and the local Abenaki and Pawtuxet and Wampanoag Indians, the first harvest… it must have seemed like they finally caught a break, like something finally went their way, but not before they’d lost half of their family and friends. Out of that crucible of hardship, Thanksgiving was born. They weren’t giving thanks that their lives were easy and comfortable, or that everyone they loved had made it, because none of those things were true. They were giving thanks that they’d survived, they’d harvested, and they had reason for hope as the second winter fell quickly upon them. They were alive.

That Plymouth Colony festival is the standard Thanksgiving origin, though there are plenty of records of similar observances from well before. The first French and Spanish had Thanksgivings after their own fashion, and the Virginia colonies were sort of making a habit of it before the 1621 Plymouth observance we traditionally invoke.

Local and national Thanksgiving observations continued in various forms, but it first developed into a perpetual national holiday in 1863, declared by President Lincoln. 1863… right in the midst of our nation’s darkest days. This is a judgment call but I don’t think there’d be much argument that the Civil War was the worst, the low point, of our history as a nation so far. Would anyone disagree? Brother fighting brother, and by far still our deadliest war. And right in the middle of that is when we decided to have a national Thanksgiving.

This is just one of those funny things about humanity. When things are going great, we’re all too likely to start taking them for granted. It’s one of those things everybody knows; you don’t need a preacher to tell you this. You don’t really appreciate your health until it’s threatened. You don’t fully appreciate food until you’re hungry. All too often, we don’t appreciate the people in our lives until we miss them. I hate to admit it, but the truth is, if God never let me hurt, all the evidence indicates that I probably wouldn’t be grateful for much of anything. Which is crazy. Are you crazy too?

Well that’s just one more thing to be thankful for. We have a God who chastises those He loves. And He’s always teaching us to set our hearts on the truest and deepest blessings, instead of on things that will disappoint and let us down.

Not always, no. The truth is: in my weakness, in my humanity, sometimes I’d rather God bless me well within the limits of my imagination. See, I’ve got a whole long list of things I want to happen. When those things don’t happen, does that mean God is giving me less than I want?

No, if there’s a mismatch between what I want and what God gives, it isn’t because God is giving me less than I want, but because He’s giving me more.

If we’re talking about blessings God gives that sometimes are hard to take, for starters, how about His commandments? God only wants the very best life for you and me. So He does what any Father would do: He teaches us the right paths. Read the Psalms for an overwhelming and beautiful appreciation of the gift of God’s law. David, writing those Psalms, he didn’t see the commandments as a burden, a drag, a price we have to pay so God doesn’t get mad at us. He saw God’s laws the same way a sailor, lost at sea, sees a trustworthy map. This is how we get where we want to be! This is how we know where the deadly dangers are, to avoid them! Breaking these commandments isn’t freedom, it’s shipwreck. And David knew this firsthand, didn’t he? God wants to bless us by setting our feet in righteous paths. Because God wants only the best for his children! But we don’t want to be quite that blessed. Every sin is the choosing of something less than God wants for us. Every sin that’s ever been committed, from Eden onward, was God saying “This is best!” And us saying “mmmm, I’ll take this instead.”

But God’s desire to bless us goes so far beyond just not wanting us to shipwreck. He’s got a destination in mind. And here, too, God’s desire to bless us outstrips our desire to be blessed. “I’m going to teach you to love,” God says, “I’m going to call you further and further into faith, hope, and love, to perfect you in charity and make you more like me.” How, God? “I’m going to break your heart, break it open, smash your selfishness and make you ache for my Kingdom. You’re going to feel it; you’re going to be homesick for Heaven.” Umm, God, if it’s all the same, let someone else have that. Sounds tough. My heart’s okay the way it is. “But haven’t I told you in my Holy Word, I am close to the broken-hearted?” Well, God, maybe I don’t want to be quite that close. “I do.”

And then, one day, at a time we do not know, one day for each of us comes God’s greatest blessing of all. Then comes the fulfillment of everything we were made for, everything we could ever hope for, the complete healing of every hurt and sorrow. And when it’s someone we love, we don’t want to let them go. We want more of… this. Why? Because we want more for them than God? No, because we want less. We want things to stay comfortable and the same. We want ourselves to stay complacent and the same. Most of all, we want people we love to stay here and not step into the Kingdom of God where Jesus has prepared their place forever… at least, you know, not quite yet. But God wants more.

I hope you’ll be thinking of those things, too, and thanking God for all of them. But I wanted to take this opportunity to remember to thank God for all his blessings, even the biggest of all.

Thank you, Jesus, for breaking my heart open over and over again, for loving me too much to let me stay as small and selfish as I am.

Thank you, Jesus, for loving me so much that you ask me to share Your very life, even to take up the Cross of my own, and to carry it all the way to share in Your victory.

Thank you, Jesus, for loving us so much that you can’t settle for the way things are in a world that’s beautiful but broken, for not leaving us in sin, for calling us onward and upward into Your Kingdom.