March 05, 2016
The Father saw him coming a long way off… which means he was watching. How many times a day, for how many months, did he look out over the road, straining his eyes… is that someone coming? Is it him? 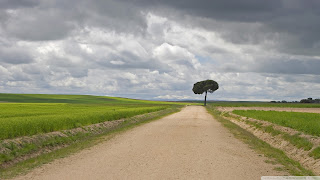 How many times was he disappointed?… no, it’s not him. It’s not the one whose place is empty at the table, it’s not his lost son. But still he watched. He looked out over the empty road, hoping that this day he might come home.


He didn’t have to let him go, at least not that way. “Give me my inheritance now!” He could have been expected to punish his son severely even for asking that terrible thing. He certainly wouldn’t have been expected to go along with the request. But the thing was, his son was already lost, badly lost, to be asking that. When had he slipped away? Maybe the father had seen it happening gradually, helpless to stop it. Maybe it took him by surprise. His youngest didn’t want him around anymore, didn’t want to do the whole father-son thing, just wanted the goods. “Let’s stop pretending, Dad, just give me whatever I’d get when you die and I’m out of here.”

And, amazingly, he did. Maybe the money was the only thing he could give his son, wanting to give his love, wanting to give himself, but finding that gift flung back in his face. “Just give me the stuff.” Okay. If that’s all I can give you, if that’s all you want. You can have my stuff if you don’t want me. You’re my son. I’ll give to you the only way you’ll let me.

And then he was on his way, and we don’t know if the boy ever looked back. But you can bet the father’s eyes never left the figure going away down the road, lingered there long after he’d gone out of sight. And from then on, he was the road-watcher. Watching and hoping. Life went on, but he always had at least one eye on the road, looking for his missing son.

The boy’s story becomes very boring at this point, too boring for Jesus to really say much about it. “A life of dissipation” or “a life of debauchery.” You know all about that, and he thought he was such an adventurer, he thought he was so wild and free and passionate, blah blah blah. All of us who’ve ever walked that road did it pretty much the same way. Let's face it, we just aren’t very creative when we try to replace God with pleasure.

But one day something wonderful happened. He had the great blessing, the great good fortune, to have the worst day of his life. He hit bottom. Grace had been chasing him all the while, of course, but he’d just run and run and found something new to try, some new depth to sink to, some louder sin to drown out the voice of his conscience. But now he had nowhere further to run. He was starving in a pig sty. He didn’t have any money left. He didn’t have any ideas left. Best of all, he didn’t have any pride left. The phrase Jesus uses is: “He came back to himself.”

Then the next wonderful thing happened: he met his father for the first time. Walking along, rehearsing his little speech, but he didn’t get to go over it in his head for as long as he thought because here comes Dad, running down the road to meet him before he ever got to the house. He started in just like he’d practiced but before he could even finish the speech, Dad put a robe around him and a ring on his finger and shouted that it was time to celebrate. It was a dumb speech anyway. It was all about what he deserved… and he was absolutely right about what he deserved, and it was absolutely irrelevant. He found that out, meeting his father for the first time. Not an obstacle in the path of doing what he wanted, not a piggy bank to be smashed and looted, but his father.

It wasn’t long, though, before the father’s attention turned to another empty space. And he went outside, and found his other lost son. The revelry and celebration sounded far away and muffled out here under the open sky. He met his son’s anger. “I’ve obeyed you. I’ve slaved for you. Where’s my fatted calf?”

You can imagine the word bouncing around the father’s head, echoing and haunting. “Slaved? If that’s the role you’ve determined to play, then what must you think of me?”

When had he slipped away? Maybe the father had seen it happening gradually, helpless to stop it. Maybe it took him by surprise. The father’s answer is heartfelt and heartbreaking. “You have me. You’ve been with me. We’ve been together. We’ve shared a life.” The unasked question hung in the air: “is that not enough?”

Jesus does not tell us the ending of the story. The elder son holds that power, with a choice to make; the ending of the father’s story is now in his hands. Will he go in to the party? Will he forget about what everybody deserves, and go in to meet his father for the first time, and share his joy? It’s a joy that’s generous beyond reason, reckless, limitless… in a word, prodigal.

We don’t know what happens. There are many possibilities. Here’s one: the father returns inside, giving his eldest some time and space because that’s what he needs right now, and the father gives, always gives, that’s who he is. Going back inside, he sees his younger son and wonders, “is he back?” The returning son had his speech, he said he was guilty, he said he was hungry. But the father must also have noticed what he didn’t say: “I missed you.” So the invitation was extended, the risk was taken, the robe and ring were given, and the feast begun.

And for as long as the feast continued, into the night, he always had at least one eye on the door, looking for his missing son. He had a beggar. He had a slave. All he ever wanted was his sons.

Anyway, like I said, one possibility. Jesus didn’t fill in any of these blanks, and neither did the characters in his story, really, because he made them up. Yours is the story that matters to Him, and the ending is yours to decide.