March 13, 2016
Here’s a little hint for reading the Gospels, and especially the Gospel of John: when the time of day is mentioned, there’s often a symbolic weight to that. It’s easy to pass over such a detail, but when things are happening in the dark of night, or under the noonday glare, or at breaking dawn or falling dusk, usually you can find meaning there.

This story happens in the Temple early in the morning, at daybreak. Think for a second about daybreak, that time when the sun rises and casts a bright light on the decisions you made in the dark of night. The things that seemed like a good idea at the time… or, if not exactly a good idea, at least relatively harmless. Or, if not harmless, at least easy to get away with. Or, if not easy to get away with, something you simply need. Or, if not something you really truly need, something you want badly enough that you decide to give yourself a pass this once. Adam and Eve reached out to grab the forbidden. We all have. And like Adam and Eve, we talked ourselves into it, or allowed ourselves to be talked into it. "The Commandment is arbitrary and repressive," says the serpent, "and God is kind of a jerk for insisting on it. It’s just a stupid rule, and why should you follow it?"

And in this particular moment, sitting here in church, we can easily answer, can easily say why it’s better to follow the Commandments. It’s very clear here in the light of day, sitting in the Temple like we are. Of course God knows what will bring us true happiness, and what will destroy it. Of course God has given us commandments, not because He’s a bossy jerk, but because they are the way of life and salvation instead of death and misery. But there are other times, darker times, when all those obvious things aren’t so obvious anymore, and the commandments seem strange and repressive, and God seems far, far away,… and it’s just you and the serpent and whatever particular sin, whatever forbidden fruit it happens to be that you suddenly realize you really, really want. And sometimes we’re strong and we come through, and sometimes we’re weak and we don’t.

This woman, this night: she didn’t. And then the sun was rising on her shame, her weakness, her bad decisions, and somehow she found herself surrounded by angry judging people. Their scorn, their contempt, their disgust, their condemnation is almost palpable… but we might imagine it was only a background noise compared to the terror she must have felt, caught in the most humiliating way, drug into the public eye, drug to the Temple itself. Now they stand all around her ready to pronounce her fate and execute it.

You have to do this sort of thing if you want to consider yourself completely righteous. If you want to consider yourself righteous, then all the evil in the world has to be the fault of people who are fundamentally different from you -- worse. You have to believe that sinners are a separate group, and it’s all their fault, and not yours at all. She is being used by them in that way, that age-old scapegoat cycle. We have to lay sin on someone and destroy them, so that we will feel pure. Of course it never works, so the cycle keeps going.

There’s another way they are using her, too, when they find this troublemaker Jesus and spot an opportunity to trip Him up. They’re trying to find something to use against him, and the woman they are dragging around is, to them, just a tool to be used. 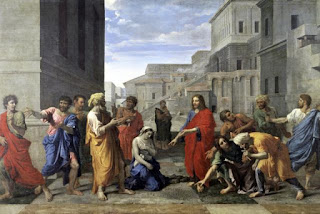 Why is she alone here? It says they caught her in the very act of adultery. Now, I may be just a celibate priest, but if I have my facts straight it seems to me like you can’t catch a single person in the act of adultery. One answer: you might say she’s alone because she’s a woman and that her society, like ours, judges women more harshly in these matters than men. And you wouldn’t be wrong. And that’s just simply evil, and I hope it’s obvious that as Christians we need to be resisting that double standard.

But I think there’s another spiritual element to her solitude, as well, because in the moment of judgment we always are alone. In fact, you never feel more alone than when your weaknesses have been exposed and you are being judged by others, do you?

I do not condemn you.

That’s a great moment, one of those things you can’t explain, you’ve either experienced it or you haven’t. To hear Jesus say He doesn’t condemn you. I’m looking forward to this afternoon’s penance service, because there will be two other priests and I’ll go to confession, and Jesus will tell me as He has so often before, I do not condemn you. Your sins are forgiven. I hope many of you will join me. If you haven’t been to confession for awhile, now’s the time. Don’t wait for a bunch of Pharisees to drag you to Jesus, it probably won’t happen that way.

Speaking of the Pharisees, what happened to them in the story? They went away one by one, beginning with the eldest, and maybe we should give them some credit for recognizing their conviction and dropping their stones. That was a much better move than what they’d planned. They’ve admitted they are sinners, just like this woman they’ve been using, good. And then… they walk away. Is that the right move, the best move? We’ll come back to that.

And you can run down the list of sins, and we’ve got them all. That’s what we’re in church for, to be forgiven and healed, and to ask for strength to go and sin no more. I was thinking, jokingly, about making signs for the church doors that say “This entrance for repentant sinners, all others use other door.” But that sign would be on all the doors, yeah? Well, I’m easily amused.

Don’t spend your precious time catching other people in their sins. Don’t waste your energy trying to make sure they get what’s coming to them. Don’t walk around holding a stone ready to throw at the next person who lets the team down. Drop that stone. But for Heaven’s sake, please don’t walk away. That’s not the right move either. If you ever do catch yourself acting the Pharisee, standing in contempt over some poor soul, don’t walk away. Kneel right down beside her. That’s where you want to be, that’s where we belong. That’s where it all happens: when we hear Jesus say, you are forgiven.