April 03, 2015
Jerusalem at Passover is indescribable. The whole kingdom of Judah descends on the city, which seems pretty big until the pilgrims start pouring in the gates. They just keep coming, and coming… and there we were among them, my sons and I. Rufus and Alexander had a long trip from our home in faraway Cyrene. Israel is nothing like Libya, but there on the south coast of the great sea is one of the places our people settled when we scattered. We are few at home, but here we are many. This week in Jerusalem my sons can see what they are part of, and truly participate in the story. The pilgrims come. The Lambs are chosen. The story of the Exodus is retold. The blood is poured out in the Passover sacrifice. And we remember that wherever we are, whatever may happen, whatever the Romans may say, the Lord our God has made us free.

When you pack the city with so many strangers from so many places, you’ve got a recipe for rumor, and the whole city buzzed with whispered stories about the Nazarene.  “I heard he can heal blindness, injury, sickness… just by prayer.” “They say he delivered a man from demons that all the Temple priests couldn’t cast out.” One man spoke quietly, seeming embarrassed by what he was saying but unable to hold it in, “I heard he can raise the dead.” But all these stories were just so many eddies in a larger current, swirling beneath the one great question that had seized the city: “Is the Messiah among us? Could he be the One?”

Each year at Passover we look for the Messiah. For the children, it’s urgent and real, a wide-eyed excitement… could this be the year? But of course that fades as the years go by, and it’s not that you don’t believe, but part of you has stopped expecting. Your parents, and their parents, and their parents before them didn’t see his coming, so what are the chances you will? But this year it’s different; this year we’re all like the children, feeling the question urgent and real. No thought could be more exhilarating. To think that amid these throngs, somewhere in these streets,  walks David’s son, the hope and deliverance of generations, the Anointed. Could it be true? It felt like being a child again: could this be the year?

We chose our lamb and made our arrangements for the Passover meal. It’s quite an industry, as you can imagine. But there’s plenty of time to take in the sights and spectacles, to see the City of David and walk along the walls, telling Rufus and Alexander again the stories on which they’ve been raised, saying “this is where it happened.” Most of all, the Temple. I don’t care how religious or not you are, no Jew can climb Zion unmoved. With the Psalms on our lips, we really did rejoice every single time someone said “let us go up to the House of the Lord!”

So anyway, that was Passover week in Jerusalem. Until Friday. I guess something had to give. You get a city that packed and bring it to a boiling point, and something has to happen. The chief priests were beside themselves. They bent a lot of ears. The governor acted his part, claimed to be in control, but you could tell he was scared. And just like that the people went from a palm-waving “Hosanna!” to a fist-waving “Crucify him!” After that it happened so fast… and suddenly instead of two crosses, the soldiers needed three.

Anyone who thought he was the one to deliver us probably knew otherwise before the scourging was over. Or was he waiting for a Samson-like turnaround? No, as they unlashed him from the pillar and made their mockery and laid the Cross upon him, there was no mistaking this man for the one who would deliver his people. He was just another victim, accursed, afflicted, despised and rejected, one of those from whom men turn their faces… those were the words that came to my mind, and as I recognized where they came from, something stirred again inside me.

But we wouldn’t have to wait long to see some kind of end, whatever it was. He was passing by us now, carrying his cross, and anyone could see he was near death. And then… well, there it is, he’s fallen. The soldiers will have a lot to answer for, they got carried away, and their victim didn’t make it to the crucifixion. No, wait… he moves… he reaches out for the cross… why? In his half-alive weakness, he reaches for the Cross like it's his only friend, he almost seems to want it. But his strength is too far gone, and the soldiers turn to the crowd. And I feel a sick quiet panic as I realize they're pointing at me.

I blink, swallow, and step forward. This clearly isn’t a good day to defy Rome. “Rufus, Alexander, stay here. Don’t follow. Dad just has to help out here, don’t worry, I’ll be back for you as soon as I can.” I step between the rows of people into the open street and the soldiers are laying the cross on my shoulder and the street is lined with people but for a moment it's just me and Him. Our eyes met, and I won’t even try to tell you about that. A rough shove shakes me out of that moment and I know the lash isn’t far behind, so I begin moving. 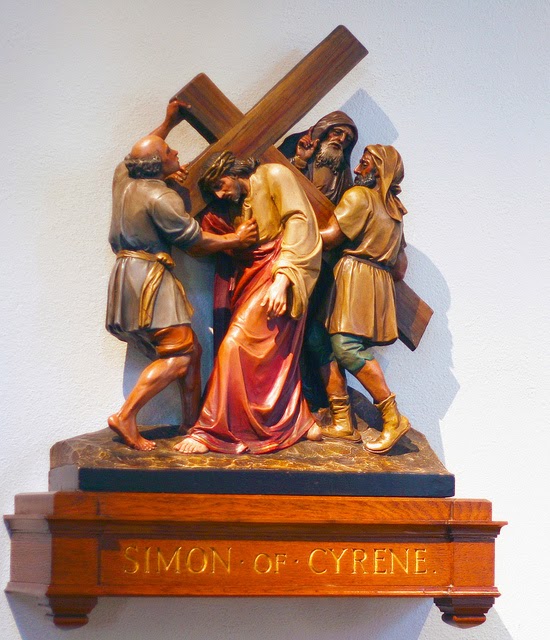 The cross was heavier than it looks - and it looks pretty heavy. Tall and massive and strong enough to hang a grown man on. But as he walked ahead of me, all he could do to keep putting one foot in front of the other, I couldn’t help this strange feeling that even still, he was the one carrying the burden. There I was, stumbling under the awkward heavy bulk of the Cross, and I still felt like the weight I’d taken off him was scarcely a sliver of what he bore.

What was he carrying?

You can imagine how long those minutes were. There were happenings along the way, points that stood out, like stations along the road. That woman - I found out later her name was Veronica. Twice more I remember him falling. The quick words he spoke to those women, at once tender and utterly chilling: ‘weep not for me but for yourselves and for your children.’

And there I followed. I did not set out to carry that cross. I did not choose it. And perhaps you wouldn’t judge me too harshly if I told you I wouldn’t have chosen it. Still, I carried it. I know that people still argue about whether I carried it willingly, with courage and love, or whether I was just an unwilling bystander who only accepted what I had no choice in. Could you imagine that maybe it was a little of both? Isn’t it always? Isn’t it for you?

Released by the soldiers, I quickly worked my way through the crowd, wanting desperately to escape the stares, this awful attention, but as I slipped toward the side streets I realized people were still staring at me…why? I looked at my clothing and realized why… the blood, transferred from his head and shoulders to the cross, and now marking me. “Marked with the blood,” the words from the first Passover in Exodus came to mind. Just a coincidence, surely, but… it seemed important.

The boys were relieved to see me - the last they’d seen was their father stumbling off out of sight at the point of a Roman sword - and we embraced with tears of relief. My little part in that day’s events was done. The real story of that Passover was just beginning, but you know it well.

By then the evening was approaching, and my disoriented sons asked me what would happen next, and if it was time to go get the lamb we’d picked out for the Passover. I was still a long way from making sense of it all, so I don’t know why I answered the way I did… “Son, I don’t think we’ll be needing a lamb this year.” And even as I spoke I noticed that some of the blood had got on their clothes, too, from when we’d embraced.