July 05, 2014
“Your interests are not in the flesh, but in the spiritual, since God has made his home in you.” That’s Romans 8:9, and I wish it were true. But sadly, this verse has the form of an instruction, an ideal - something we’re trying to make true. It’s the way disciples of Jesus should live. Paul is blunt in explaining that it makes no sense for a disciple of Jesus to mix up spiritual life with its opposite. If God is dwelling in us, there’s no room for anything contrary to Him. Paul reminds us that the Spirit that lives within us… that’s the same Spirit that raised Jesus from the dead! The power at work within your soul is nothing less than that same Spirit! Do you think that’s going to make a difference in your life?

Paul sets up a simple distinction: the spiritual versus the flesh. We have to be careful with this language because it easily can be, and often has been, misunderstood. Does it mean that the flesh, our material bodies, the whole material world, are wicked? Many Christians and many others have believed that. You can see that idea at work when people seem to be suspicious of anything pleasurable. Anything physical and pleasurable must somehow be dirty. If you pay attention you’ll start noticing this everywhere. Something being pleasurable and something being wicked or sinful are used as synonyms. I always notice it on dessert menus. “Our creme brûlée is sinfully delicious.” “Layers of decadent chocolate.” “Wickedly indulgent custard.”

If our culture was more Catholic, those menus might say “this chocolate cake is so good that it’s a bearer of divine grace, a sign of God’s love, and a foretaste of God’s Kingdom.” See, Catholics don’t believe that the physical is bad. We don’t believe that if you’re having a good time you’re probably sinning.

So what’s the real sense of Paul’s distinction between the flesh and the spirit? To understand, let’s start by going back, way back, all the way to the Beginning. God separated light from darkness on the first day and the earth from the heavens on the second. On the third He separated land and sea, and filled the land with vegetation. On the fourth day he made the lights of the sky, and on the fifth creatures of the sea and air. On the sixth day he made the beasts and man.

How about that? Man was created on the same day as the beasts. Right now a lot of women may be thinking, “well, duh.” Sorry ladies, I’m afraid you’re implicated in this too! We’re referring here to humanity in general.

There’s a deep harmony here between the biblical account and simple biology. You and I are, biologically speaking, animals, and the fact that we are much more than animals doesn’t mean we get a pass on that part of our nature. We have all the animal drives, all of animal nature. It’s part of us, and that’s not bad, and it’s not wicked.

It is wicked when we fail to be more than beasts. So any lady who’s ever said “men are pigs” is onto something biologically and Scripturally true. We can be. So can you. We can live on the beastly level. We can live on the level of the sixth day. We can get stuck on the sixth day, and fail to be more. See, we were created on the sixth day, but we were created for the seventh day: the day of God's rest, the holy day. What does the Book of Revelation tell us is the number of the Beast? Let the wise one understand, Revelation says, that the number of the Beast is the number of man, 6…6…6. Stuck on six, not moving onto seven where we belong.

The question is, are we going to be more than that? Think of how humanity can transcend and elevate nature. Food is a good example: we have a drive to find food just like any beast. But think of a big family meal, a Thanksgiving or Christmas dinner, or maybe a Fourth of July barbecue. The animal need to eat is elevated to something that is spiritual and beautiful and full of grace. That’s a perfect example of how humanity transcends the sixth day and lives into the seventh day, God’s day.

Quite a lot of life can be explained like this, if you think about it. Are we living on day six or day seven? That’s the question St. Paul is addressing in Romans. He says “we need not obey the flesh,” meaning we have the power to live in that seventh day.

That’s very good news, because the beastly part of our nature is a cruel master. Ironically, people often think that indulging every appetite is freedom. In reality it quickly leads to the opposite. There is no one less free than those who can’t resist their appetites. We are meant to be the masters of our flesh. When that gets upside-down, we are slaves indeed.

Even though the spirit and the flesh sometimes want different things, we need not be at war with ourselves. Keep the spirit in charge, and make peace with the flesh. God is working on us, to heal our nature, to bring them into perfect harmony. Here’s a nice thought about Heaven: you will never want something that isn’t good for you. What a fantastic healing that will be!

But here today, that healing is ongoing and incomplete, and that harmony hasn’t been fully achieved. We live in tension between the sixth and seventh days, our beastly nature and our spiritual nature. When you’re sitting at table and you’re not using good manners, maybe when you were little, maybe your parents asked you “were you born in a barn?” The Scriptural answer is, well, sort of, yeah! When we’re hungry enough, or unmindful enough, you dig into your food like an animal. You lapse into the sixth day. This is true enough of all our appetites. 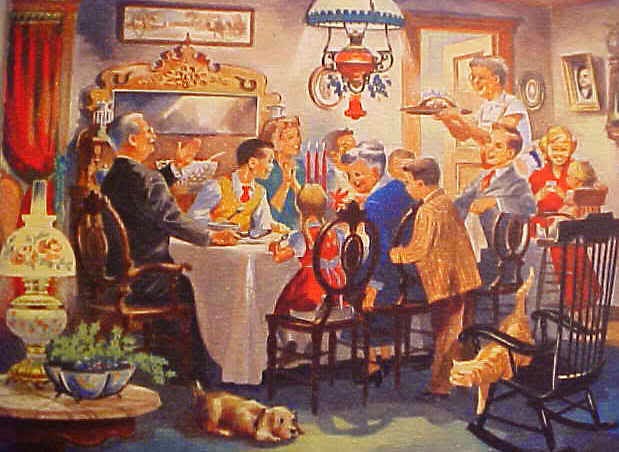 That takes discipline, and it doesn’t always come naturally. We have to learn table manners, and that process can be annoying and difficult. There are other disciplines we must learn that are much more difficult. But to discipline the flesh, to put the spirit in charge, is the only way to real freedom.

That’s certainly part of what Christ meant when He said “my yoke is easy, and my burden light.” Sometimes we fear self-control, we fear saying ‘no’ to ourselves, because we’re afraid that it will make us slaves. We’re afraid that submitting to God’s commandments will burden us, and suck all the fun out of life. But that’s a lie. Living according to the Spirit doesn’t feel like taking on a burden; it feels like taking one off. It feels like freedom. It feels like getting our snouts out of the trough and joining the family feast. It feels like a declaration of independence.

Is there a part of you that’s stuck on the sixth day? Today’s the day to declare your independence. You do that by claiming the power of the Spirit of God. The power of the seventh day. It was on the seventh day, in the fullness of time, that a light filled the tomb and the stone was rolled away. It was on the seventh day that the Spirit filled flesh that had been dead, raised it up, made it glorified and immortal. That Spirit - think about this! - that Spirit is living in you today. That’s the good news of Romans 8 and Matthew 11: that by God’s Spirit we can live free, we can trade our heavy burdens for the easy yoke of Christ, we can live on the seventh day.