April 18, 2014
My spear gave him the last of the five wounds. Well, many more than five; there were the thorns in his scalp, cuts from the scourging, bruises from the rods. You’ve seen it depicted on film or in print, I suspect, in varying degrees of brutality. It’s all speculation, of course. For now, just believe the Gospel accounts, the eyewitnesses: the man was badly hurt. It’s not why I joined the Legion. It’s not what I had in mind the first time I put on the armor and the colors and swelled with pride. But out here, out on the fringe of the empire, it’s part of the job. So, yes, we got very good at hurting people.

We were very good at hurting people in such a way that no one who witnessed it would ever step out of line. You don’t hold together an empire this big by showing mercy. I can show you a man who talked of a kingdom built on mercy. He’s hanging on that Cross. That’s his mother at the foot of the Cross in so much pain that you’re not even strong enough to look at her. That’s his best friend with her. Where are the rest of his friends? They’re nowhere. Gone. Fled. Except the one who gave him over into our hands, who’s dead by his own hand. That’s one especially treacherous, and one especially loyal, but ten out of twelve not hot or cold, just… well, like I said: they’re nowhere.

I was here, not out of compassion, not out of antagonism, just doing my job. I didn’t give it much thought. I put a lot of effort into not giving it much thought. You have to do that, you have to dissociate yourself, if you’re going to plunge a spear into the heart of a man you neither hate nor fear. Remind yourself that this is your job: make sure he’s dead. Tell yourself he probably is, and if he isn’t you’re doing him a favor. And it was that simple, in a way. 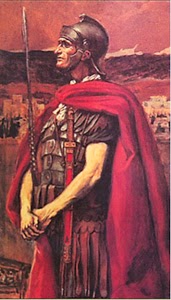 But it’s never really that simple. Here’s the result of just doing my job, finding a way to quiet my noisome conscience, the result of my own brand of lukewarm nowhereness. What do you do when you realize that you’re the murderer of innocence, the killer of everything good and beautiful and true? When you realize that you’ve looked straight into the face of perfect love, and slid a blade into its heart? He was dead before I did that, it turns out, but that was just as much my fault as the ones who drove the nails and flung the scourge. Did I understand at the time? None of us did. He said so himself: we knew not what we did. But isn’t that exactly our sin? Isn’t it yours? Does it make my choices less guilty? You tell me.

They gave me a name, eventually: they call me Longinus. There are lots of stories, and for all you know some of them are true. Maybe all of them. But if you go today to the City I served, the one they still call the Eternal City, to the greatest church of Christendom, named for another nowhere-man who made good, if you walk up the Via Della Conciliazione, through Bernini’s colonnade and St. Peter’s Square, if you walk through the door of the building that is home to two billion people, up the main aisle past the tombs and statues of Saints and Popes and Kings, to the very threshold of the altar, and 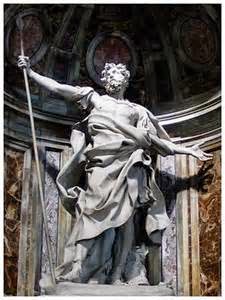 look just to your right, you’ll see me. And why? Because I got one thing, just one thing right. When I saw Him, I mean when I came back from nowhere and really saw Him, I finally did understand. And I knew what I had done. And, unbelievably, that didn’t matter, because I understood what He had done. “Truly,” I said, “This was the Son of God.”