February 17, 2013
There's a certain shock involved in realizing that Satan has taken the words right out of our mouths. These three temptations, these traps he lays before the Messiah - they are not chosen carelessly. He is laying before Jesus our charges, not asking Him to stop being God, but rather demanding that He be the kind of god we want. All the anger and frustration men and women have ever directed at God, all the disappointment and accusation, it’s all summed up in the three temptations laid before Jesus in the desert. 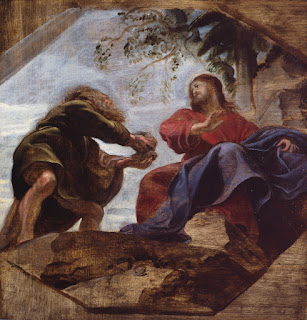 The first temptation: Bread. If you’re the Son of God, turn these stones into bread. You want my love? Then give me what I want. Why should I have to work and struggle? Why should I have to be so exhausted all the time? Just give me bread. I don’t want to learn to stand on my own. I don’t want to learn hard work and perseverance. I don’t need the strength that comes from enduring hard times. Spare me the trials of a free and responsible human being. Here’s my list of demands. It’s not so much to ask. I deserve this. It’s what I expect of my God. It’s the least you can do. So, Jesus, you want to be my Messiah? Show me what’s in it for me. You want to be worshipped? Give me what I want. You want my love and devotion? Here’s my price.

The second temptation: Dominate. If you’re the Son of God, take over the kingdoms of the World. Take charge. If there’s such a good God up there, why is the world so twisted? We want your Kingdom here. Not in Heaven, not in eternity, here. If you want me to believe in you, if you are the Son of God, take away this terrible curse you’ve given me, take away this awful burden, take away this unbearable weight of my freedom. Protect me from the consequences of my actions. More importantly, take away my neighbor’s freedom to protect me from the consequences of his. Seize control to deliver us from this world that we have made, with its poverty and violence and stupidity and greed. Is that slavery? Fine. Make us slaves. Don’t you understand, we want a god who will seize total control. Our lips may speak of freedom, but our actions show that we hate it. We hate it so much we’ll give it up to anyone. Tyrants, ideologies, a shadowy empire of bureaucrats and regulators, anyone. We must be ruled. So that’s my second demand, Jesus. Fix the world. Take dominion. Grasp the power. Does that mean making a deal with the devil? So be it.

The third temptation: Proof. If you’re the Son of God, throw yourself off this cliff. Let’s see what happens, what do you say? Alright, Jesus, maybe I’ll believe in You, but I’m going to need some proof. Do a trick. We want miracles. We want a sign. And don’t think it’s just this once. No matter how many signs I see, I’ll always need another one. Remember how yesterday I was so sure you were real, so convinced of your providence and love? Well, that was yesterday. Today I need more. All the signs you’ve given me through the years, they’ve faded from memory like last night’s buzz. I need something now. How many signs will be enough? Let’s be honest. We both know it’ll never be enough. I will always want one more sign. I will always say, “just do this, and then I’ll believe in you.”

His reply? “Man does not live by bread alone.” “You must serve only God.” “Thou shalt not put the Lord your God to the test.” So few words in response to the furious challenge of Hell and humanity. All the demands of us disappointed creatures ringing through the ages, and is this really all He has to say?

But actions speak what words can not.

You want me to throw myself down? I descended into the darkest depths of Hell. You want me to seize power? I will wear your crown, however deeply the thorns may cut. You want me to fill your stomach? This is my Body. Take and eat. 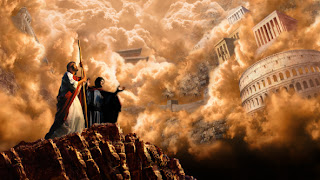